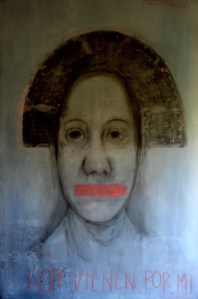 In September of 2010, Kristi Wilson and I curated an exhibition at Soka University of America entitled “Specters of Culture: Argentine Post-Dictatorship Art”. The exhibition featured the paintings of Sebastian Chillemi and Pablo Salvado.
Argentina just celebrated the 200th anniversary of its independence, a proud occasion but also one for reflection. The military dictatorship of the 1970s and 80s committed a genocide that left thousands of people dead or disappeared. A small number of the perpetrators are in jail or being prosecuted.
Sebastian Chillemi’s paintings conjure up the faces of the disappeared, granting the observer the opportunity to consider their histories. His flowers are symbols for remorse and a promise of remembrance.
Pablo Salvado’s colorful painting of popular Argentine figures such as Jorge Luis Borges and Eva Peron, question the power of icons that are sometimes cherished, sometimes censored and other times condemned. These paintings speak to a new generation of Argentines who navigate a complex landscape involving trauma, memory and the desire for social justice.
Sebastián Chillemi was born in Buenos Aires in 1968. His images send us back to the terrible genocide enacted by the last civic-military dictatorship in Argentina. Chillemi studied drawing and painting in the Library of the National Congress and with Martín Palottini. This year, he began to organize collective expositions with the group Junta D in various cultural centers in Buenos Aires. He is also part of the Liga de Artistascollective. Chillemi is the recipient of many awards for his work. His most recent prizes include third place in the 98th Palais de Glace National Salon drawing selection, and first prize for painting in the 15th Palermo Viejo Painting selection. His paintings and drawings can be found in private collections in Argentina, Uruguay, Brazil, Colombia, Perú, Venezuela, México, Canada, Spain, Holland, Switzerland, France, Austria, Ireland, Italy, Germany, England, Portugal, Greece, Scotland, South Africa and Korea. On most weekends Chillemi can be found at the Palermo Viejo art fair in the Plaza Cortazar exhibiting his paintings and drawings.www.sebastiananibalchillemi.blogspot.com

Pablo Salvadó was born in Buenos Aires in 1978. He began painting with the artist Elena Marconi at the age of twelve. As an adult he studied figure drawing and painting with Juan Lopez Taetzel, Ariel Mlynarcewicz and Ernesto Pesce. He also attended the National Institute of Fine Arts in Buenos Aires where he explored other means of expression such as sculpture and ceramics. In 2007 he formed the group Gato Negro with two other artists looking for a platform to explore live portraiture. Pablo’s work is mainly focused on painting and drawing portraits and landscapes using strong color contrasts as an instrument of exploration. He has participated in several group and solo exhibits in Argentina.

Introduction to the Colloquium by Professor Ian Read (Soka University of America):

Short sequence from my presentation:

To watch a short video of the exhibition click on this link:
http://www.youtube.com/watch?v=qRdih8HnNSA&feature=related