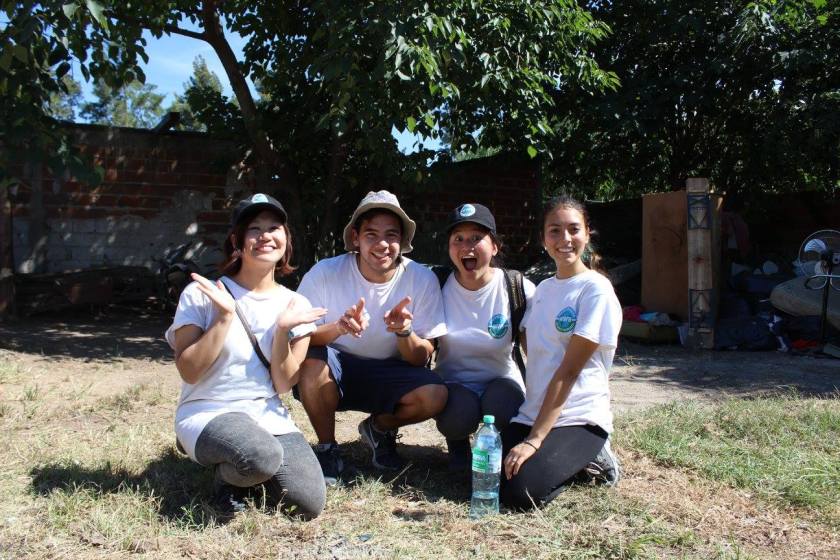 On January 26th, we worked on collecting the garbage which was scattered over Daniela’s backyard. We’d been instructed by staff members to stop working while the US Ambassador was visiting and looking around the house; however, we were eager to do something, rather than just stand and gawk at the ambassador. As the simplest way to improve their living condition while we waited for his arrival, we started collecting garbage in the home’s front and back lawns. When I saw the scene of the backyard, where all different kinds of garbage were just scattered over, I lost my words. There were tiny pieces of broken glass, diapers, food leftovers, and many other hazardous objects, and Daniela’s kids were walking around without shoes. The amount of garbage and the smell just overwhelmed me. More shockingly, as I approached the pile of garbage, I found a girl sleeping in a bed, under the sun. The trash was just an accepted part of their environment.

We spent the whole morning for removing the trash. Meanwhile, Daniela’s children watched us hesitantly in the distance. They looked a little bit anxious, and I figured out the reason why when  the second daughter hesitantly asked me to give her back a doll which I just threw it on a pile of the garbage. The doll had lots of stains and it’s hair was almost gone. But after I passed it to her, she held it tightly and stored it in a broken fridge. For me, the doll was nothing but a trash, but I realized that for them those could be reminiscent of their fun memories. Until then, I had strongly believed that cleaning the backyard is absolutely helpful for them, but I found that it’s also so important to consider what is really helpful for the family. Otherwise, I might violate their memories and lifestyle, like I could too easily threw away the girl’s doll, her treasure.

By the afternoon, however, some kids came out from their house, grabbed shovels, and started helping us removing garbage. One of our members asked one of the kids, who told them to ask us. He just shook his head, and made me filled with warm pleasure. By looking at us, even without words, they were motivated to clean their backyard. When I realized, more than four kids, from the age of 4 to 10, were sweating and working hard with us to clean up the backyard. Thanks to their help, we could end up making two piles of garbage and making some spaces without any bits of glass for them.

However, this story doesn’t end here. The next day, we went to check the backyard. Honestly, I felt sad when I saw that new garbage were again scattered over the backyard. The scene really taught me the difficulties of changing one’s habit and lifestyle. That is to say, we might need more complicated and philosophical approaches to keep a backyard without garbage rather than just setting a trash can there. By realizing the difficulty of actually making a change, I was overwhelmed by despair. That was just too conspicuous to understand that the backyard will be filled with garbage, regardless of our and the kids’ work.  However, I still believe that we could make some positive impacts because our cleaning could show a clean backyard without garbage, and kids experienced the work of removing the garbage. That might be a little change, but someday they may choose a backyard without garbage by remembering the scene of clean garden and the work we did together.