FREE and open to the public! 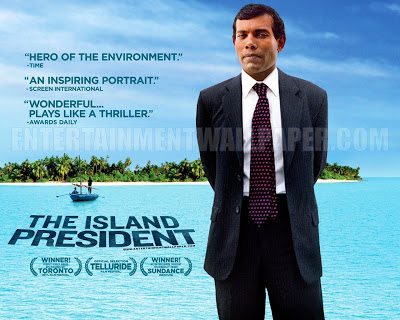 The Island President lifts the issue of global warming out of the theoretical and into the personal. President Mohamed Nasheed is trying to prevent 385,000 people from drowning. His nation of 1,200 low-lying islands, the Maldives, is sinking into the Indian Ocean as sea levels rise due to global warming. Climate change experts say that some of the islands will be submerged within 20 years, threatening the lives of the largely impoverished inhabitants as well as inundating the lavish resorts that dot the islands. Nasheed’s unprecedented contingency plan is to move his entire population to a new homeland. As he conducts serious discussions about this with Sri Lanka and Australia, Nasheed is doing all he can to prevent this looming disaster by trying to convince world leaders to halt global warming.

The Island President is a little like a non-fiction Mr. Smith Goes to Washington elevated to the world stage. The filmmakers received exclusive access to follow President Nasheed as he prepared over several months for the 2009 Copenhagen Climate Summit in December. The terms of the 1997 Kyoto Treaty on Climate Change were about to expire, and leaders from around the world converged on Copenhagen to hammer out a new treaty with renewed urgency. Go behind the scenes with President Nasheed as he tries to convince world leaders to finally take serious action against looming danger of climate change. The stakes couldn’t be higher for President Nasheed, who this as the last chance to save his homeland, and the world.