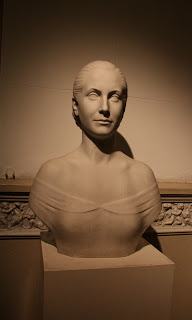 Museo Evita, located on Lafinur 2988 C.A. de Buenos Aires, Argentina, is a museum dedicated to Eva Perón. This museum, built in the first decade of the 20th century and declared as a “National Historical Monument,” opened on July 26th, 2002 to mark the 50 year anniversary of Evita’s death. The 20 exhibitions inside Museo Evita accounts Evita’s life from childhood to death, including her clothes, portraits, and details about her theatrical and political career. We are able to know Evita and the life of the nation surrounding her by literally walking through the recreations, the dynamic design of the museum’s layout, and the exhibitions, as if taking a visual journey down her life. The museum’s rooms and halls are laid out chronologically (taken from museoevita.org):
* Permanent Exhibition of Eva Duarte (first room): Prologue, Myth, Childhood and family, Eva the actress, Meeting Perón
* Eva Perón (second room): October 17, The wedding, First lady/ trip to Europe, Temporary Home N 2, Female Vote, 1949 Constitution, Eva Perón Constitution
* An Unexpected End (third room): The Renouncement, Her disease, Death and her Body, The Reason for my Life
* Temporary Exhibition (fourth room): Exhibition, Photo Gallery, Art Space

“I am the wife of the president of Argentine people, but presidencies expire and in the end, history remembers unselfish heart and upright conscience” (“October 17” Eva Perón- second room). Also known as “Holy Evita,” Evita was a patriot for poor people and a “die hard adherent to the fight for the people’s cause.” She founded the Maria Eva Duarte de Perón Social Aid Foundation, which supported a mass democracy advocating rights related to workers, families, senior citizens, education, culture, and social use of wealth. A symbol of women’s rights, Evita changed the nation by creating the Female Perónist party and heavily influenced the women’s right to vote. She created a foundation for women to take their place in the political scene, which was unheard of during this era in Argentina.
The unique history and significance of Evita’s life is
important for our Learning Cluster and the Argentine nation because the legacy she left behind marks the establishment of its society today. She created a model for couples in government, where the wife is the President’s “right hand man” and plays a considerable role; a model followed by the former president and his wife, Néstor Carlos Kirchner. Evita not only established the wife’s position in a presidency, but was also the head of the movement that dramatically changed the history of Argentina. As a vital figure of the Peronist movement, which began during the presidency of Juan Perón, Evita popularized the movement that led to the disappearances of those who followed its ideals during Argentina’s Dirty War.