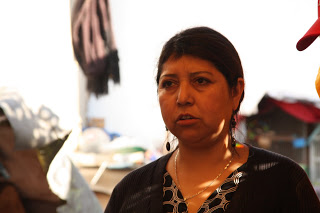 Maquiladora is an industrial area in Mexico. There are over one million Mexicans working in over 3,000 maquiladoras manufacturing plants or export assembly plants in northern Mexico, producing products for the United States. Mexican labor is harshly exploited. Thanks to NAFTA, taxes and custom fees are almost nonexistent, only benefitng the multinational corporations. Maquiladoras are owned by the U.S. and countries in Asia and Europe and some could be considered “sweatshops” composed of young women working for as little as 50 cents an hour, for up to ten hours a day, six days a week. In worse case, workers are forced to live in shantytowns that lack electricity and clear water surrounding the factory cities.

On January 22, 2011, we visited Tijuana, one of the most well-known regions for Maquiladoras with the San Diego Maquiladora Workers Solidarity Network. Professor Enrique Davalos, San Diego City College, describe to us the history of Maquiladoras along the Border. On the tour, we were able to grasp the results of NAFTA – people’s struggles with immigration policy and the destructive effects of the factory pollutants to the people of Tijuana.
The first sight that we evidenced after entering Tijuana was the infinite barbed wires constructed along the border. On the wall, there were numerous artworks that were created to display people’s confrontation towards the immigration policy. For example, crosses that represented countless people who were killed when attempting to cross.
Next, we visited a basketball court that used to be filled with the toxic pile produced by a Maquiladora. The pollutants had hazardous effects on the residents that lived below the factory. In some cases, mothers gave birth to babies without brains or other body parts or organs. With the efforts of five brave mothers, concrete was built to cover the pollutants. However, this concrete can only stop the poisonous leak for 100 years.

We then visited an area where people live in precarious homes with no electricity, clean water or sanitary accommodations. The residents are not recognized as citizens by the Mexican government which means that they do not receive public services including health care and education. They work at Maquiladora factories in bad working conditions such as low wage and unreasonable length of working hours. We interviewed two women who live in that area. One of the women told us that she works at Maquiladora factory almost every day from early morning to midnight and she earns only 6 dollars in a week. Because of this harsh work environment, she has been suffering from skin rashes in her eyes and hands. Also, the production of the Maquiladoras has affected the environment. Factories located close to the residences have polluted the river. As people used this polluted river for drinking, many of them have fallen sick.
We also had an opportunity to interview female workers who were emplloyed in Maquiladora factories. Lourdes Lujan, shared with us that every day she had to clean 1,200 camera lenses with caustic soda (strong toxic chemical) that caused her face to burn. Although she talked to her boss about the burn, the boss ignored her claim. Another ex-worker also shared the extreme degree of the sexual harassment at her workplace. Bosses often humiliated female workers by calling them “pigs” and “filthy women.” As we heard their stories, we understood how women are looked down on and treated unfairly at the factories.