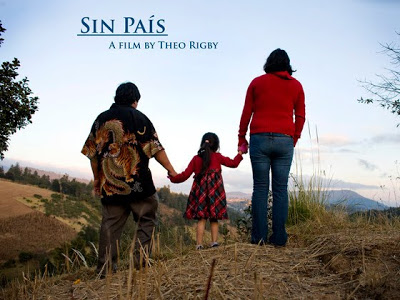 The fact that families are ripped apart is a stark reality of deportation. Sin Pais (Without Country), created by then graduate student Theo Rigby for his thesis project, is a moving documentary of just one family’s struggle with the callous process of deportation in the circumstances that part the family members are in possession of United States citizenship and the other half are not.
Our Learning Cluster class screened this film and later was fortunate enough to have a short Skype interview with Theo Rigby himself about his approach to filming such delicate material as family separation. We asked about his personal background regarding film and immigration and the struggles of the family behind the scenes that could not fit into the documentary, such as the many legal complications that were faced and were curious about what happened to the Mejias after the film was finished. (For example: How did you choose this family? What was the court case for the family like? In what circumstances can you appeal? Considering that this topic overviews many sensitive topics, what precautions did you take when documenting this film?)
Rigby’s interest in the topics of immigration and deportation began with a dissatisfaction of their empty representations in the media. Journeying to the border, he followed on camera a family of a single mother and her fourteen children for five years that were eventually caught by the Border Patrol.

Rigby knew that he wanted to document the struggle of someone in the process of fighting a deportation case for his graduate thesis project but had no set characters for his film project. He came into contact with the Mejia family by emailing friends and colleagues in order to find someone who was fighting deportation. Filming commenced just two weeks prior to the deportation of Sam and Elida Mejia, who had decided that their oldest son Gilbert, who was undocumented but not being deported, and their middle daughter, Helen, a citizen, would stay in the United States while the youngest, Dulce, also a citizen, would go to Guatemala. Although the Mejias case looked bleak and it was a very tough time for the family, they openly welcomed Rigby in the hopes of raising awareness for as well as among the countless others that face deportation.
Rigby was conscious of the difficulties that he might face in order to capture the family’s natural response to the situation, especially during such an emotional time for the family. He was a “gringo” invading their personal space. However, he eventually recognized “when to talk to them and when to step away” and eventually became a friend, confidant, and family. Rigby was present throughout the entire deportation process, including court meetings.
The documentary was created for academic purpose, but the end result was that it played an important role in deciding the fate of the Mejia family. Rigby finished the documentary just two days before the last court meeting that would make the final decision. Pleading the emotional aspects of family separation, as Rigby explained to us in the interview, is usually a weak argument and a long shot in deportation cases, yet the Majia’s lawyer appealed anyway, and the documentary was sent to the jury and lawyers as well. Surprisingly, Sam and Elida were granted a visa. However, the Mejia’s troubles are not over. The visa is only temporary and must be reapplied for, Gilbert’s legal status is also still in question, and the family has already experienced the difficulties of being forced apart. Nevertheless, the future looks hopeful for the Mejia family and the documentary film Sin Pais continues to raise awareness.

What they normally do, and what’s the line from administration from Bush to Obama. Is basically, you know, we are looking for criminals, undocumented criminals and we are going to like, you know really, vigilantly hunt down these criminals that are undocumented. So, they have a list of people who they think are undocumented, who they think have committed crimes. And they use kind of that list to go into communities, sometimes really wreak havoc and instill a huge amount of fear in the community. In another cases they just go into a house, like the Mejia house, and they’re looking for someone who has committed a crime who doesn’t live there. So they knock on the door and ‘hey, where is Jose Mejia?’ and they are like ‘Jose Mejia? We don’t know Jose Mejia, our name is Mejia but there is no Jose here, we don’t know anyone’ and then the ICE agents would say ‘oh, sorry about that, where are your papers? Where are your papers? Where are your papers? That’s how they go into the premise of looking for a felony…And end up arresting many people who are undocumented, who haven’t committed a crime, other than crossing the border illegally. So that’s what happened in that case. They rushed into the house at like 6 in the morning with shot guns. Put guns to people’s heads when they were sleeping, woke them up, you know shackle them and brought them to jail. Yea, you know one part that wasn’t in the film was that Sam and Elita, the parents, actually had to wear GPS ankle bracelets on their ankles, like the same ones that sex offenders wore back then. They were in them in them for about a year and they had to report to an immigration office 3 times a week in San Francisco which is like an hour drive from their home. Just to show the immigration officer, ‘hey I’m here, I didn’t go anywhere’ as well as wearing the GPS that they gave so they felt like criminals. That’s how they got kind of involved into the immigration system.